SHOFER Race Driver takes you deep into Middle East.
Real cars, real tracks and also … . Some local music.
Unlock new cars and tracks by participating in series of races and don’t worry about anything, because you’ll never be left alone, your partner lady will contact you to get you out of any trouble.
First time, revolutionary, amazing feature you can turn on is that you never get too far aback or too far ahead in the race. So the other cars will be around , so you have the excitement of competing in a group all the time.
Make progress and earn points in the career mode by beating the races to unlock new vehicles and tracks.
and also after a successful win in the tournament you can take a free vehicle as a prize. 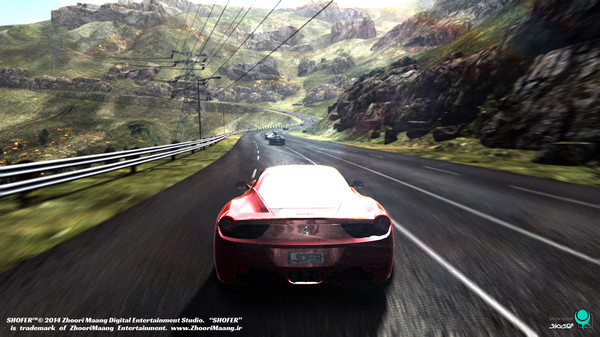 Career (SHOFER)
Career Mode allows players to unlock new vehicles and new race tracks. Players progress through the career mode by beating a series of “Tournament”. Players complete the career mode (SHOFER Tournament) upon defeating the “Stages” and the kings of Street for each event type discipline.
Tournaments are a set of Stages held at a various locations and tracks. Placing in an event on the Tournaments will earn the player points. Players can complete all the events on a Tournaments to earn enough points to win the Tournaments.
Players will unlock new tracks and vehicles and with every win and king of a Tournament. A race organization starts with one Tournament and a challenge Tournament which provides cars for the player to use at no cost. Players can pick one of the provided cars as a prize after winning a challenge Tournament and buy each unlocked vehicles.
Speed King
Speed Challenge is the Speed King Race types with special sport vehicles.
Drag King
Drag King is a race types with general vehicles. 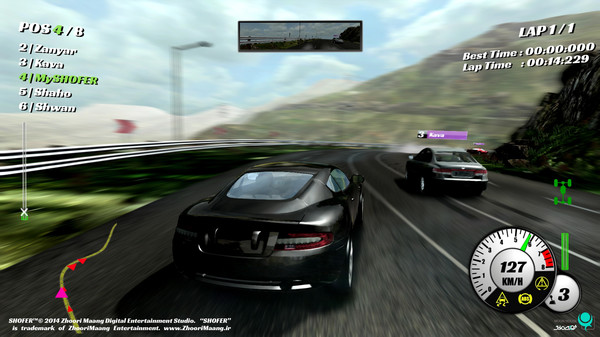 Customization:
• Multi user and Multilingual GUIs and dialogues
• In the “My stuff” feature Players can see all cars in their garage and specifically choose how to control cars
• Visual tuning is just sets of livery for each cars.
• Event Types:
Circuit – Players race with up to seven other racers on a closed race course with a set number of laps.
Sprint Class – Up to eight racers take part in a race split into two teams with different performance classes with each having four racers.
Speed Challenge – Players race with up to seven other racers on a closed race A to B course. The courses are generally designed for players to hit very high speeds.
Drag – Racers face off against each other in a knock-out tournament.
• Four different level of hardness
• Easy graphic optimizer feature to rise down and up graphics quality during game play to have a fixed frame rate.
• Rubber Band AI: Dynamic game difficulty balancing
• Very enjoyable Semi-Arcade game play with nitro support
• Realistic suspension and tire model
• Keyboard – Game pad and mouse input controllers support
• Special Kurdish music tracks. 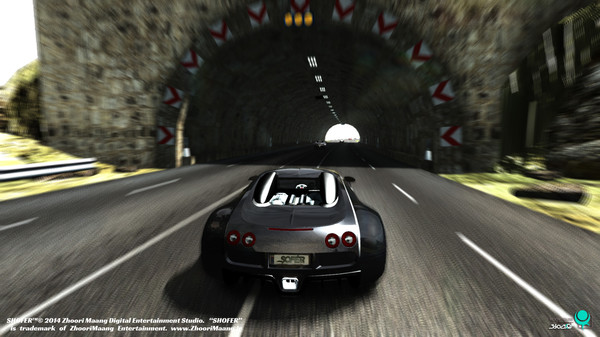 Quick Race:
Players can freely choose cars and race them in a race day they’ve created. Players can choose the events and locations.

Locations:
Many of the races take place on well-known roads in Kurdistan Mountains.
There are 15 track available with Day – Night – Reverse and All in rainy

Cars
There are a total of 24 drivable cars in SHOFER. 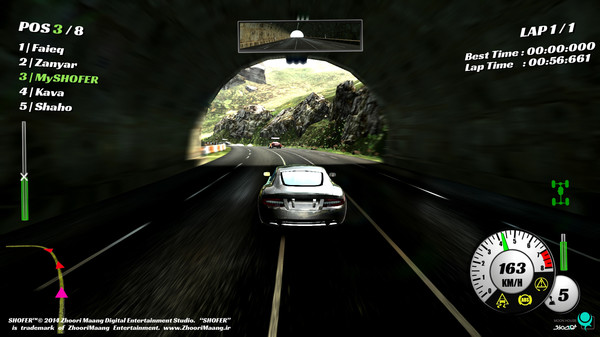